This is the biggest update to iGP Manager since the introduction of Quick Races.

One of the most popular feature requests we’ve had over the years is now here! Custom calendars allow league hosts to choose what circuits their league will race on each season, and in which order.

At launch there are a total of 24 circuits to choose from, with league hosts customising and creating their own ideal 15 race season.* The new default calendar is randomly generated every season, throwing interesting design challenges and surprises to the managers, spicing up the racing.

Introducing the brand-new Shop, with daily deals and rewards already included, soon we will release a range of exclusive special offers. Be sure to check back regularly and to download app updates to get early access to the latest special offers as they arrive.

The list of circuits in iGP Manager just keeps on growing, and now Mexico has been added, just in time for the Mexican Grand Prix weekend. We hope you’ll enjoy the fun features of this circuit, such as the unique stadium section.

These updates and the breakneck speed of development recently has been the culmination of years of hard work by the whole team to get us to this point. I have to thank the whole team for their efforts and I must also thank the community for your continued support of iGP Manager. Especially if you’ve purchased any items in the game, thank you, as you are helping to fund all of this development and more that is to come. We have no intention of slowing down, so buckle up and enjoy the ride!

* League hosts may change the calendar as often as they like, but the changes will only apply when a new season is generated. At this time, you must create a custom calendar before the season is generated in order for it to be applied. It will not alter seasons that are already generated.

How do I change the calendar schedule?

If you are the league host, go to the 'League' page > 'Edit league' > 'Schedule' > 'Circuit selection'. Here you will be presented with a list of circuits which you can modify.

Can I change the calendar length?

Not at this time, but I have opened a vote on this on Twitter. We have good reasons for locking it to 15 races: shorter seasons ensure designs do not 'max out' before the season is over, increasing intrigue and interest in car development. They also increase player retention for leagues and reduce churn and the active management sometimes required from league hosts. If leagues were to have different season lengths on a regular basis, it would potentially 'corrupt' the Hall of Fame, as leagues with longer seasons would have less breaks (and earn more XP as a result), or managers dominating a league with a short season could also win championships more often than other players. When it is fixed in length none of these factors come in to play.

Is it possible to go back to the old calendar?

Kind of... while you can't fully re-create the original 17 race season, you can rebuild it, minus your two least favorite tracks, by using the custom calendar builder.

When will these changes impact my league?

As soon as the current season ends and the next season is generated.

How often can I change the calendar?

As often as you like, even during the last race of the season, but it will only generate once, at the moment the season ends and a new one begins. 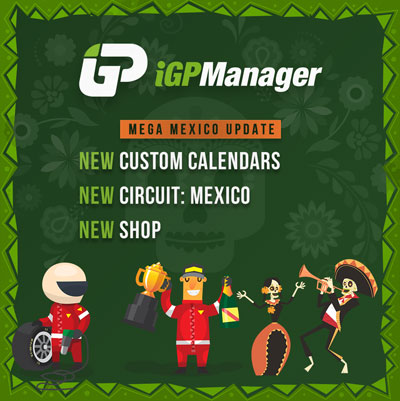 Pietro Federstaller 1 year 165 days ago
If I good understand, shorter seasons &quot;killed&quot; a eventually dominations of any teams in leagues?

Martin Alderson,-Crombie 1 year 165 days ago
How do i change the race calendar please? I have followed the instructions, but when i get onto the selection page i cannot change the races, i cannot move them etc.

Matt BP 1 year 167 days ago
I think it's a great call by the team.. seasons should be 13-17 races. If someone cuts their leauge to just a few races then they will mess up the record curves..

Jax Nexus 1 year 167 days ago
What is this? Short calender!! This is rubbish. You have spoiled my league

Richard Dageleer 1 year 167 days ago
Great work you guys, and what ever they say... it's a great game, is there space for inprovement...yes there is, but that's everywhere ... and is there some &quot;not making sence&quot; moments... for sure there are... but still, great game!

Ernesto Porcelli 1 year 168 days ago
great update but the best update you could do is change the system of free practice and qualifications, making them less casual and more true! I mean, too many times the result of the free practice is different from that of the qualifications and often those who are among the fastest find themselves leaving behind for no reason, because they do not change the qualifications with a Q1, Q2 and Q3 to play 30 minutes before of the race?
content/misc/comment/ajax/get.php?cpid=42&ccid=147&canComment=&canDelete=&cVoting=1&sorting=1comment-listparseComments 1 2 3 4
This site uses cookies. By continuing to browse the site you are agreeing to its use of cookies. Read our Privacy Policy